Hi, this is a portfolio of my works.

Here's a highlight collection of my previous works, from interactive art installations to games and systems, mostly from 2013 onwards, and ordered by (my entirely subjective criteria of) relevance. 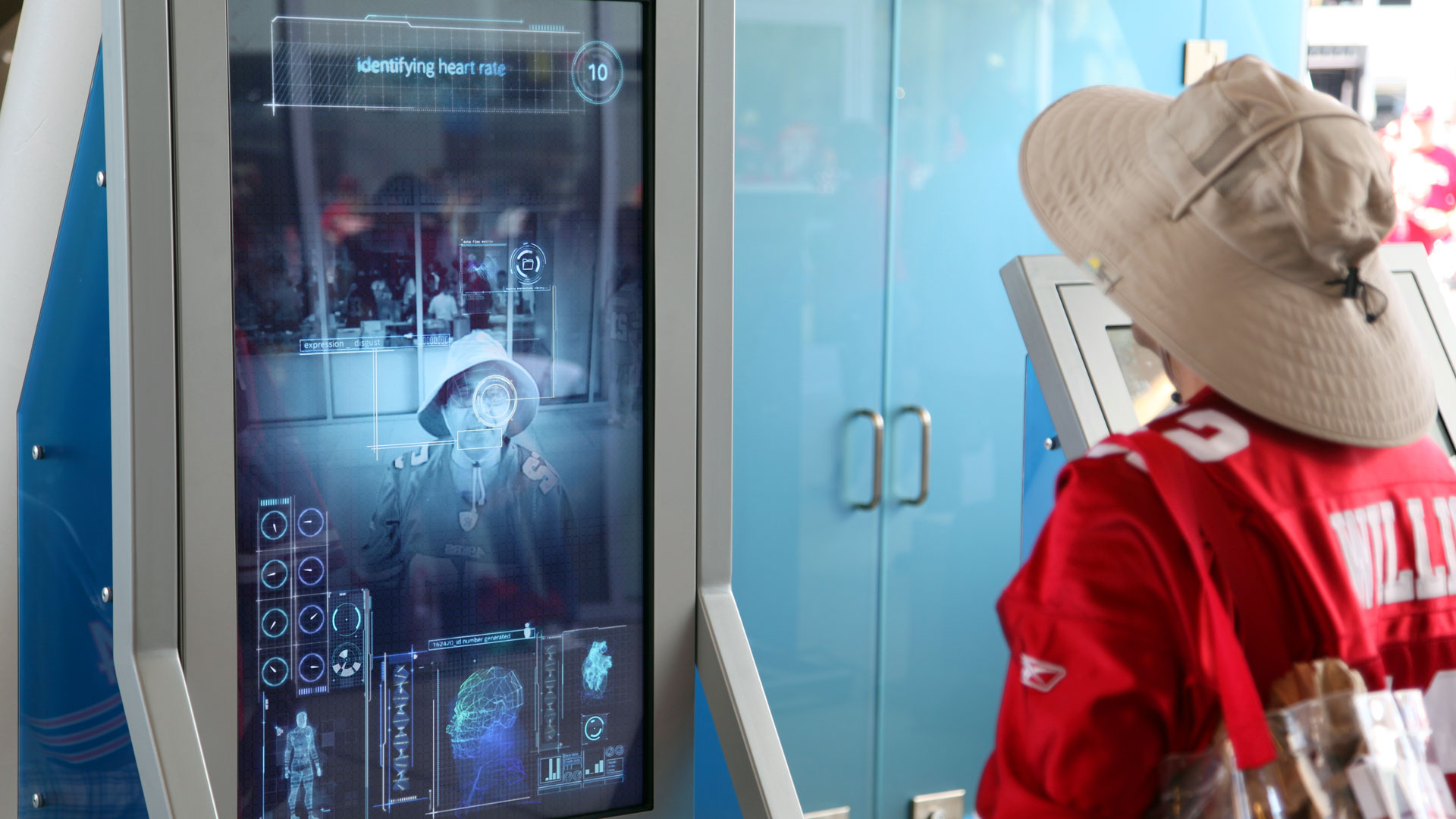 A partnership between Intel and VICE to campaign for the then-new Intel RealSense technology for computer cameras, this project was realized using state-of-the-art computer vision algorithms paired with new sensor hardware, which employed machine-learning techniques to assess multiple nuances of the user's face and body (emotional state, minute changes in the face coloring over time) to give a quick and fun assessment of their athletic prowess.

This project posed a series of interesting challenges - interfacing a Unity project with in-development hardware, debugging issues introduced by CPU revisions, employing massive amounts of alpha-composited motion graphics on top of the users' images, and dealing with interesting visualizations of biometrics. All of these challenges were met and exceeded. 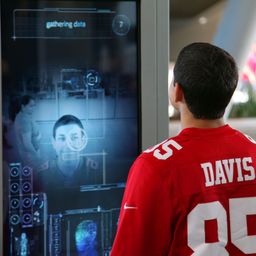 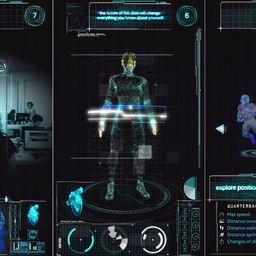 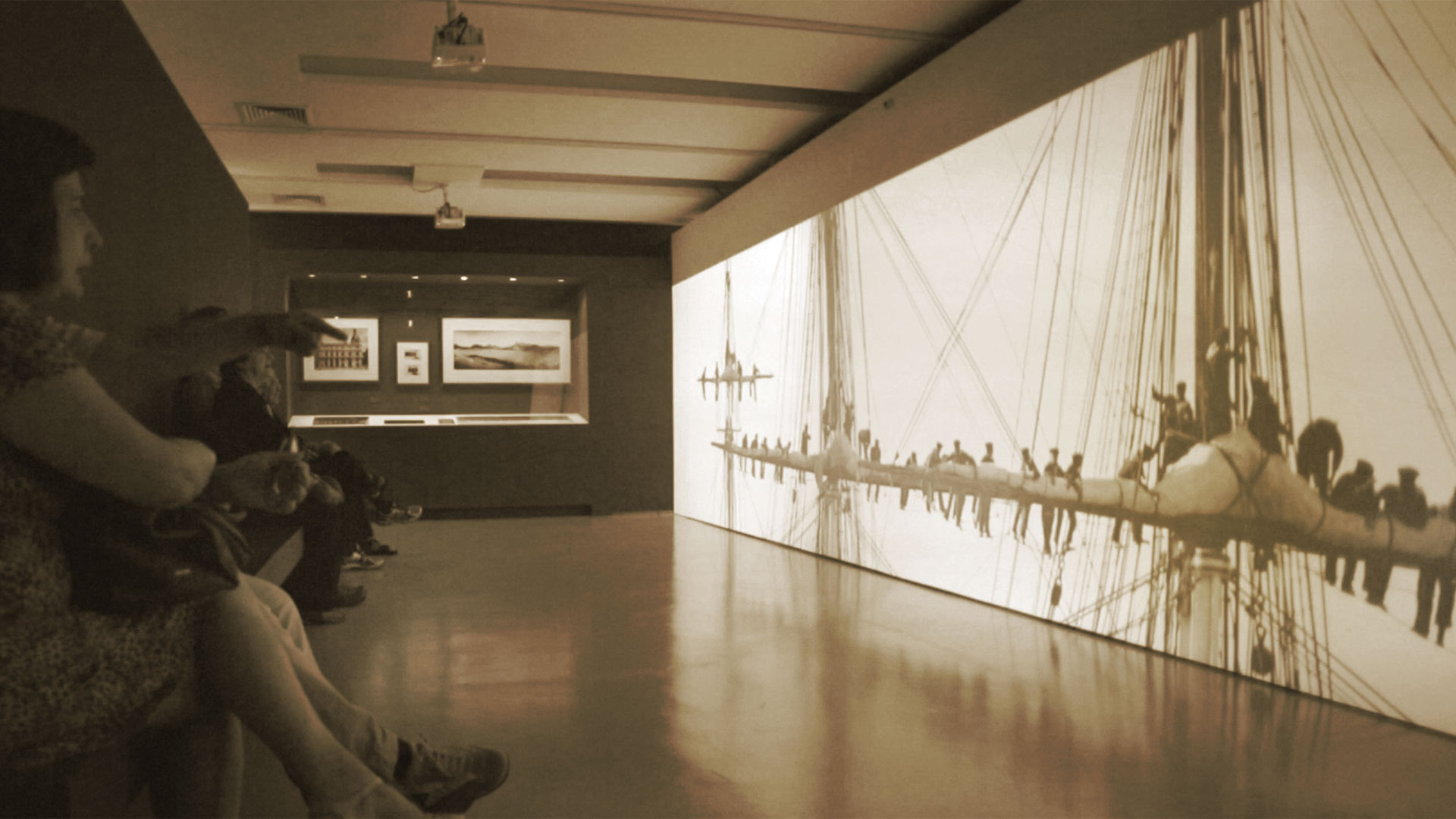 Rio: First Poses was an exhibition of the first photographic images taken of the city, between the years 1840 and 1930 - it focused on daguerreotypes, images recorded in silvered copper plates acquiring such high fidelity that they became particularly suitable for large panoramic images of cityscapes by daylight.

This project's particular challenge was centered on the immersive projection - a long wall that presented a motion graphic of selected daguerreotypes translated gently across the wall so that watchers could appreciate the detail in the images. The amount of throughput available for sending the decompressed movie data (three 8K displays side by side, displayed by three projectors outputting from the same graphics card) from the CPU memory to the graphics card in a high-performance machine was observed to be not sufficient to display the movie at 60 frames per second, in any of the solutions we had available at the time, without introducing uncomfortable jumps (jitter) in the movement of the pictures.

A specialized color decompression/conversion pipeline was devised, so that the movie would be half-uncompressed in the CPU, and that information was then sent over to the GPU to finish decompression and apply proper color to the end image - this pipeline gave more than enough efficiency gains to attain the desired performance goal of jitterless 60 frames per second display over three 8K projectors. 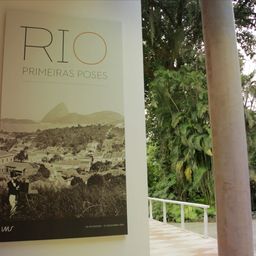 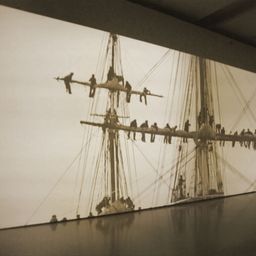 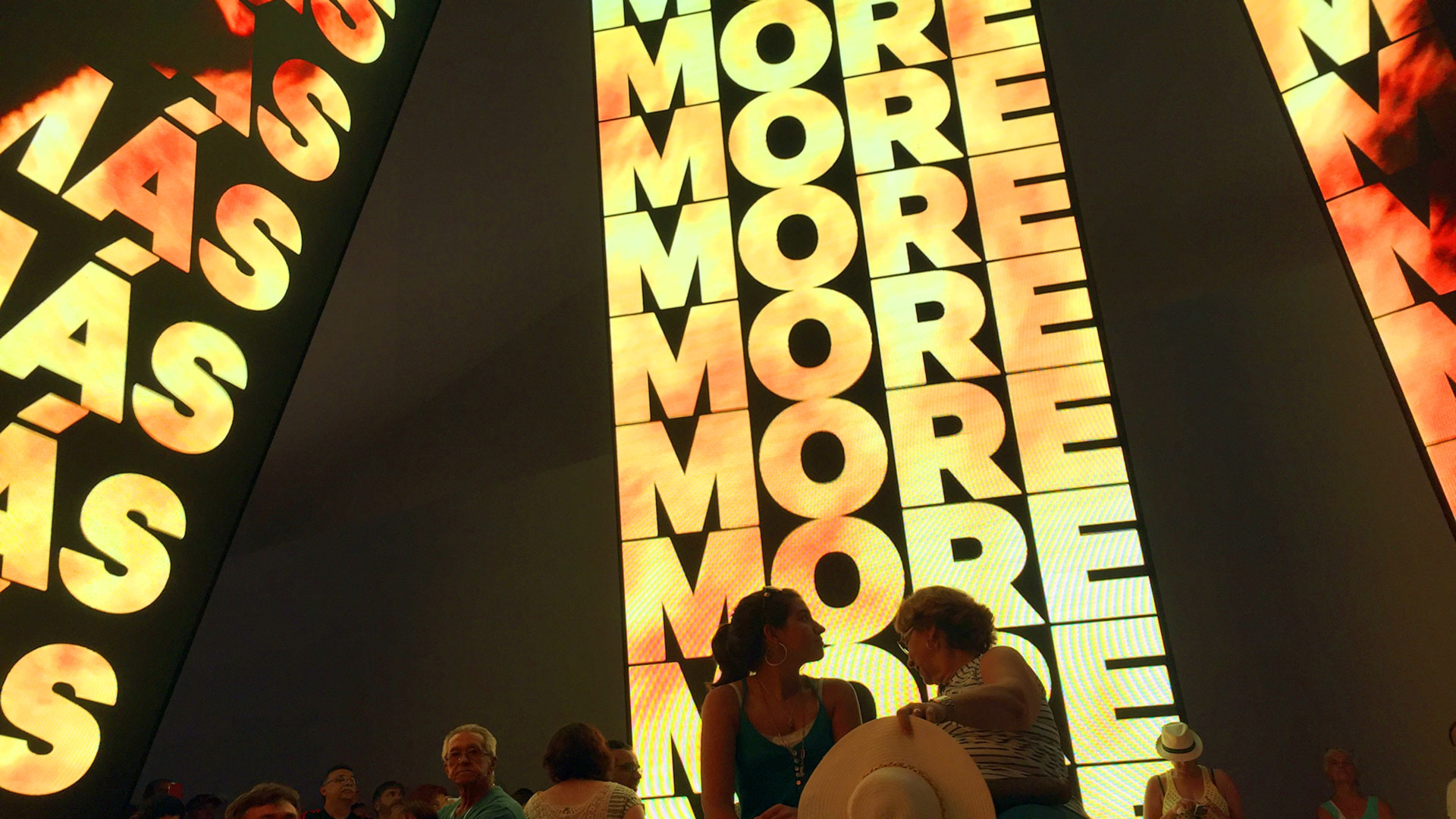 For the launch of the Museum of Tomorrow, Superuber, along with other installation companies, was enrolled to provide a collection of interactive installations to constitute the permanent exhibition. One of the pieces is a series of 20 meter tall screens that display motion graphics on the theme of the effects of human exploits in the world, marked by the new geological era named "Anthropocene"

This particular project's challenge was actually centered on the amount of audio channels necessary to provide the spatial separation that would make each screen directly matched to its sound, while also keeping the visuals in sync with the audio - all of the screens grouped amounted to a single 1920x1080 display, split in six 320-pixel wide towers, each tower with their separate stereo sound channel group. To solve this issue, Pure Data was employed to drive the twelve separate channels in sync with the video. 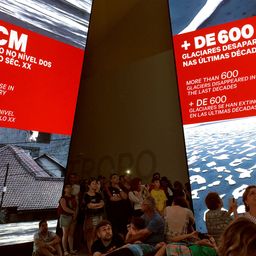 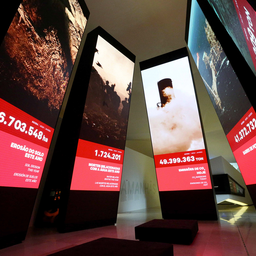 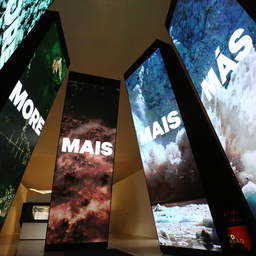 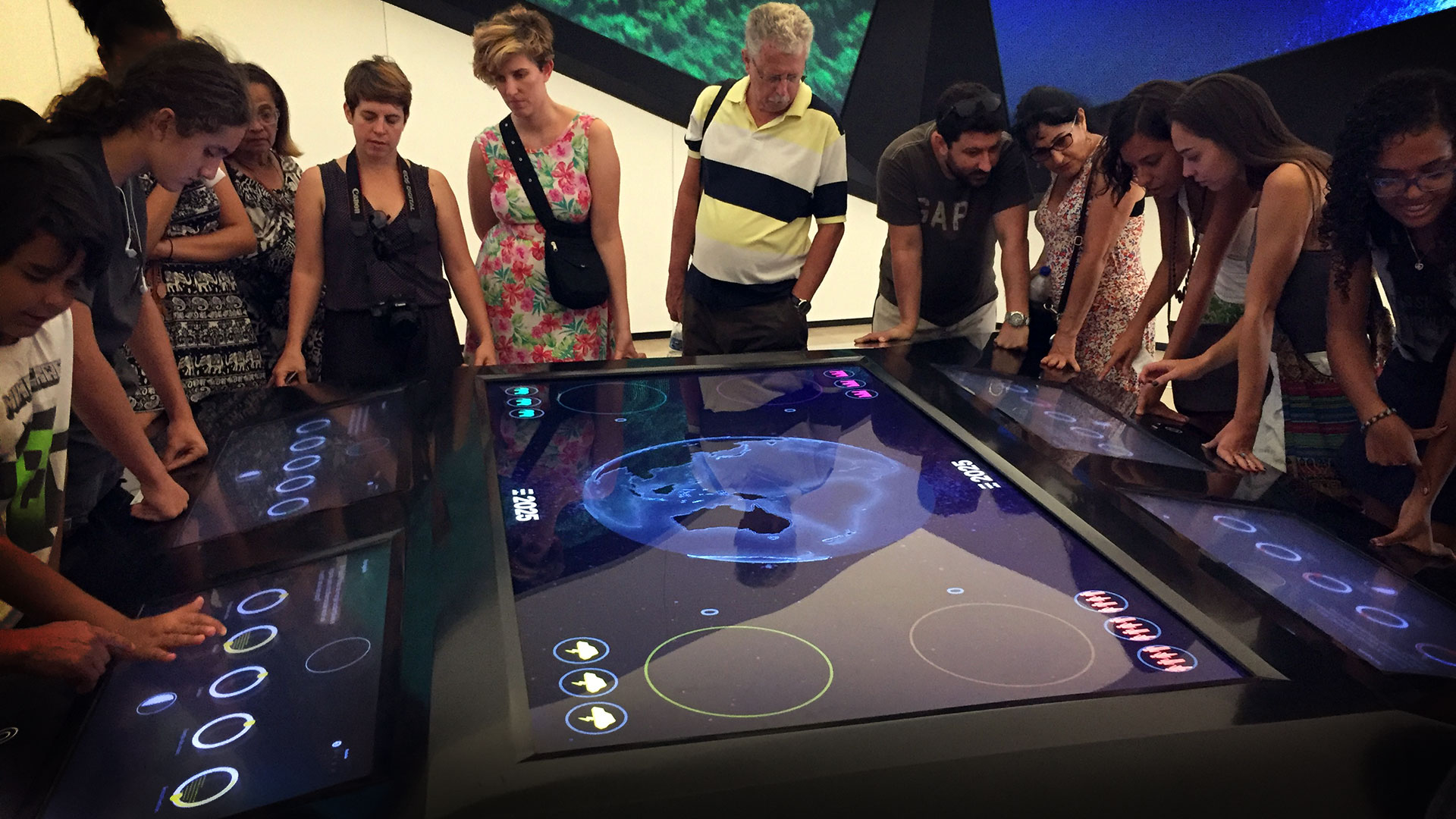 For the launch of the Museum of Tomorrow, Superuber, along with other installation companies, was enrolled to provide a collection of interactive installations to constitute the permanent exhibition. One of the pieces is an interactive table where visitors can play a simulation of impactful choices in the environment of the world.

This project was centered on a main stage visualization, using the Unity Engine, where a globe representing planet Earth rotated and showed various focal points of the actions of the players, who control their specific choices through the four separate screens around the main one, using Adobe Flex on their turn. 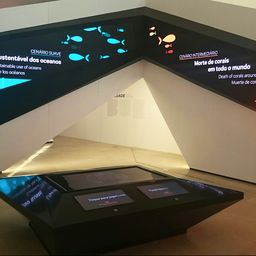 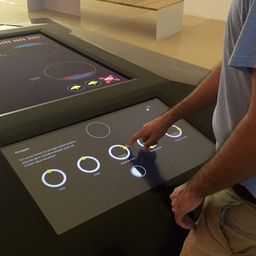 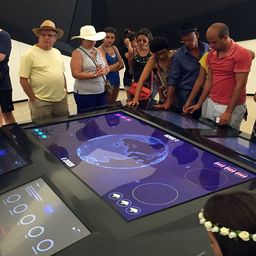 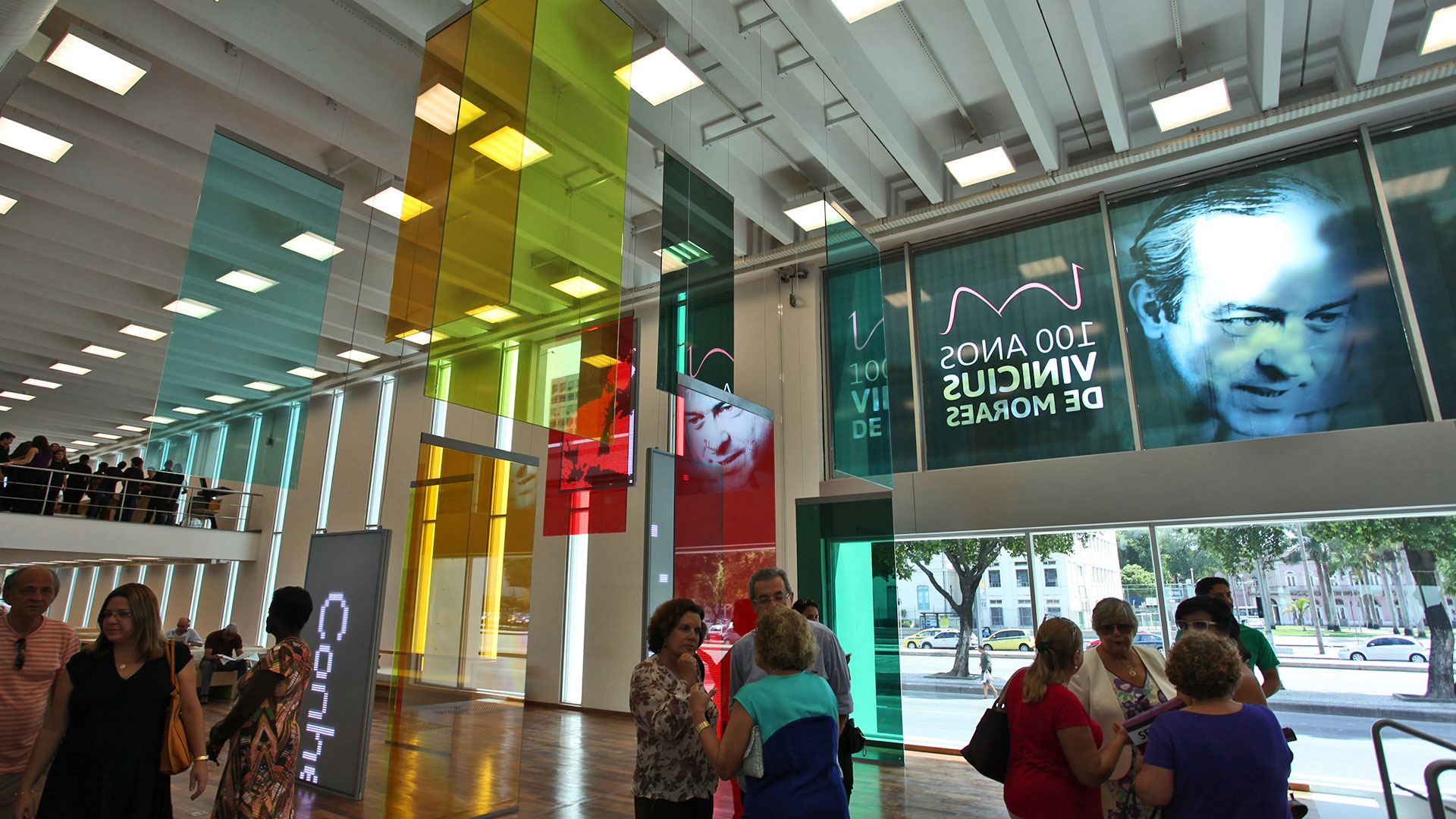 We developed a collection of installations for the reopening of the Rio de Janeiro State Library - one of these is an interactive encyclopedia in the form of a river of words, which visitors can tap onto and consult the meanings of those terms along with their context.

The technology used for this table was a combination of the Unity Engine driving the visuals and a specialized touch surface communicating through the TUIO protocol. 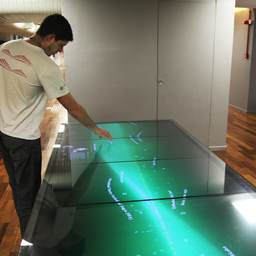 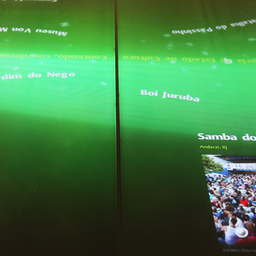 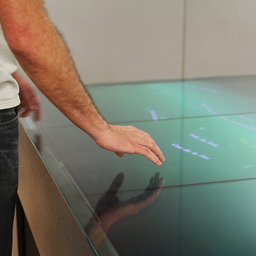 All clients' copyrights are their own, and this portfolio is not a claim on the intellectual properties of the clients.